100 cities, with a new infrastructure for collaboration

The 17.17 infrastructure enables and mobilises citizens and other key stakeholders in a city to collaborate in building more thriving and regenerative societies. Can this proven framework, which is  in use in three cities in Norway and in Mauritius, help 100 cities to reach their Climate goals?

On September 29th, we held the first  webinar of the SoTalks series on the 17.17 Infrastructure.  SoCentral, which has been leading the co-creation of the infrastructure since 2015, gave an introduction to what it looks like. We also heard  how the City of Oslo are using it as a tool to reach their climate and sustainability goals, and C40 shared their perspectives on why it might be interesting for cities around the world.

Julia Lipton,  Director of Climate Action Planning and Innovation at C40 gave a short introduction to C40, a network of the world’s 97 megacities committed to addressing climate change. She emphasized the need for partnerships to reach the SDG goals, and the importance of cooperation and partnerships in urban city transformations.
– One city is basically the same, so solutions can scale rapidly. And in every city the need to co-create solutions is crucial, said Julia.

Not an infrastructure for transport but for people
CEO of SoCentral, Thomas Berman, dived into the details of the 17.17 infrastructure, and shared experiences from building and managing this infrastructure in Norway and Mauritius. He emphasized that 17.17 is an infrastructure that works together with and in addition to existing networks and arenas. 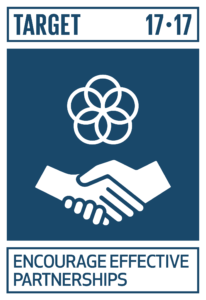 Brings about a mindshift and a holistic approach
Since the infrastructure has to be built on place, eachcity should find a suitable name for their infrastructure. In Norway the 17.17 infrastructure is known as Pådriv (Frontrunner). In Mauritius it is known as Regeneration Mauritius.
-The infrastructure provides all of us with an opportunity to take an active role in our city transformation, and we see that engaging creates a mindset shift in people and  organisations on how to collaborate. 17.17  also builds trust and hope as it gives both individuals and companies the opportunity to act instead of worrying and feeling apathy. In 17.17 everyone is on an equal footing, no one is more important than others. That provides fertile ground for new collaborations and develops solutions to complex problems. One concrete example of this is the establishment of the Circular Resource Center in Oslo, which will make it possible to store and reuse used building materials on a large scale. A solution that will create jobs, reduce emission and be financially viable, said Thomas.

17.17 provides the possibility to bring people onboard
Julia Lipton was asked if the 17.17 model and infrastructure would be of interest to any of the C40 cities.
-Yes, I think so. There are a lot of different new co-creations going on, but there has yet been developed a really common practice across the citys on how to do that effectively, and one missing piece is often how you bring people together. And that is something the 17.17 really amplifies and makes possible. The 17.17 infrastructure has the set-up to make the development equitable, benevolent, and aligned with the city’s goals. Another thing I like is how the co-financing makes more room to experiment and test new solutions, without putting so much strain on the city’s budget.

Can it be scaled beyond the Nordics?
C40 challenged SoCentral on how to scale the model to  100 cities.
-It is not about quantity, but it is important that this does not stay a nordic model. It is really good that you lead and share the infrastructure, but scale is important. How do we scale this for Latin America and Africa? The Mauritius example is a first start, and I wonder if the model needs to be further scaled and morphed to fit the context for cities in that part of the world, so it will work for them as well, Julia commented.

The new way of working
Elin Hoff Johansen  from the Department for Urban Development and Agency for Planning and Building Services in the municipality of  Oslo gave us a few examples  of  how Oslo  the 17.17 infrastructure has complimented and catalyzed their work. She emphasized the importance that the 17.17 infrastructure is closely linked to the city’s own strategy and goals.
– This is the new way of working. Hovinbyen, where Pådriv was established in Oslo, was a very dead area, but in the middle of a vast development, building new dwellings for up to 50.000 inhabitants.  Because of Pådriv, suddenly a community engagement popped up that we were not aware of, and positive initiatives from a broad spectrum of private, public and civic society started to happen without us having to initiate it, Elin explained.

You can watch a recording of the event here: